Night of the Bride of Plan 9 From Outer Space 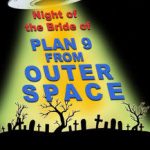 We are all interested in the future, for that is where you and I are going to spend the rest of our lives.

Friends, we cannot keep this a secret any longer! Unexplainable flying saucers lighting up the night sky!!  Strange and secret experiments at the old Lake Marsh place.  Deadly, mutated, atomic  creatures and the undead dead rising from the grave!!   Allow us to recount the almost unbelievable, relate the unreal, and show it to be more…than a fact!   We are bringing you the full and edited story of what happened on that fateful day. A tale of stark realism…  so astounding that some of you may faint! We are giving you all the evidence as it occurred, based only on the secret testimonies of the miserable souls who survived this terrifying ordeal….

Can your heart stand the shocking true facts of the NIGHT, OF THE BRIDE, OF PLAN 9 FROM OUTER SPACE?!!

Visionary director, screenwriter and sometime actor, Ed Wood, shocked and stunned audiences of the 1950s with such B movies as “Glenn or Glenda”, “Bride of the Monster” and the infamous “Plan 9 from Outer Space”.  Not with lurid tales of terror or scenes of horror found only in the darkest recesses of the human imagination; but with wooden acting, wobbly sets, incomprehensible storytelling and abysmal dialogue.  For the first time on stage in the U.K. (and possibly the last) we pay homage to the greatness of a man who was arguably the worst film director of all time! Edward D. Wood, Jnr.