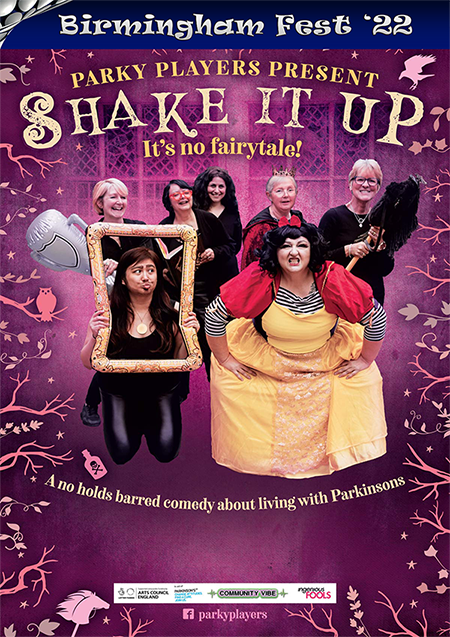 A fiercely funny, no-holds-barred comedy about modern life living with Parkinson’s. When a local community group turn up for their weekly meeting, they are surprised to find themselves in the fantasy world of Snow White and the Seven Symptoms. Be prepared to expect the unexpected and have your awareness of Parkinson’s raised – along with a big smile! A brand-new theatre company formed on Zoom in lockdown made up of People with and Supporters of People with Parkinson’s. Following the success of their sell out shows in Nottingham and at the Leicester Comedy Festival. Developed with Community Vibe and National Lottery funding from Arts Council England.

“Absolutely amazing — please take this message to as many places as you can”.  – Mike Newbold, Actor

“Very much from the heart, a really good advert for finding out more about Parkinson’s” — Sue Dutton, Theatre Practitioner

“Well written, very musical and the whole thing was put together brilliantly”.— Michael Hill, Artist and Person with Parkinson’s

Dates and time of show: