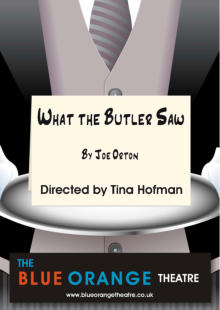 The Blue Orange’s premiere production was Joe Orton’s classic What the Butler Saw.

When Joe Orton’s final play was performed posthumously in 1969, its disregard for the conventional morals of the time outraged and enthralled audiences. Now, some 40 years later, the play has lost none of its impact and sparkles with acerbic wit and slapstick hilarity.